Much like with other art forms there are instances in which a piece of work is objectively regarded as bad. Surely a few movies, books, or songs come to everyone’s mind that just didn’t leave a positive impression. However, we cannot say that the artist was just lazy or didn’t want to make quality work. He or she tried to do something good but fails. With Graffiti, on the other hand, we can see works of art, attempted works of art, and just pure acts of vandalism. This is why it is still a debated and quite a controversial art form. It’s often not making a statement, but simply spreading hatred. Still, we should not forget that it has lots of positive potentials and that the wrongs of other people do not diminish the good work of the artist. So here is a short overview of what you should know about Graffiti art.

This is one of the most common styles of graffiti and you can see a lot of variation in this field. It can be complex and colorful, or just a massive scribble with no apparent or good reason. You just need a color spray to do a tagging style of graffiti which is why it is so accessible. If you wish to see lots of good examples in this area, then visit Prague, and go under Brrandov Most. 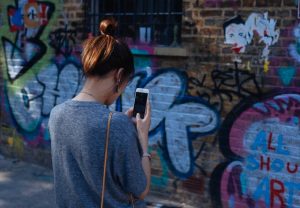 This is another popular form of art, and it can look spectacular on a wall when done right. The basis is simple, you can use paper or cardboard to create an image you wish to imprint on the wall. Just cut out the outline and use it as a blueprint for your work. Then press that onto the wall and start filling it out with color spray. One of the most famous artists that rely on stenciling is called Banksy and he comes from Great Britain. Another good example is John Fekner who did most of his work around New York.

You might have seen colored polystyrene on lots of walls, and this is also a form of graffiti art. It requires the artist to carve shapes out of packing foam and then color them. It’s basically art in 3D when you think about it, and it’s also quite accessible which allowed it to grow in popularity.

Instead of painting on the wall, you paint on a block of plywood, which is also a cheap material, and then attach it to a signpost. These can also look amazing, but they can also be attached in a way that makes the removal of the block difficult.